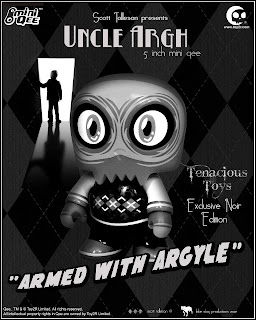 Is it considered carrying a concealed weapon if you're armed with argyle?  I mean, I guess it could cause someone harm who was a bit of a fashion snob, maybe giving them an elevated heartbeat.  But there would really need to be a preexisting medical condition for it to do serious damage, so I'm betting all charges would be dropped once it went to trial.

This is Uncle Argh, who you may have remembered being a tad more colorful when he was first released last year from Toy2r.  Well now he's gone all gloomy on us in this special Noir Edition that will be an exclusive for Tenacious Toys.  I say "will be" because everything is sitting at the factory waiting to go, but they gotta drum up some funds first.  Hey, making toys ain't cheap, but you can help by going here http://www.kickstarter.com/projects/tenacioustoys/tenacious-exclusive-scott-tolleson-uncle-argh-noir and preordering the figure.  Or if you want some cool exclusive stuff from the artist behind the toy, Scott Tolleson, you can give more.  How many of us really get to have a say in the actual creation of a toy?  I know no one ever asks me what I think, so this is our chance to feel like a part of this project.
Posted by Chris at 1:00 AM