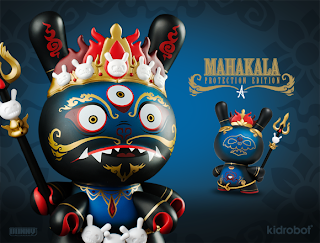 I'm not gonna pretend that I can properly pronounce this guy's name, but I can tell you that I want one reeeeeeeeaaaaaaaaalllllllllyyyyyyyyyy badly. Just look at it: it's a Dunny wearing the skulls of smaller Dunnys like a fashion statement. This is the new Mahakala 8 inch Dunny from Andrew Bell and Kidrobot. The white version of this angry bro was released at Comic Con and a smaller version of this one was in the 2012 series armed with a flaming sword. This time he's brushing the dust off of his trident and harvesting more bunny heads for a new shirt he's working on. When not collecting bones he enjoys watching Project Runway and has decided that it is now time to marry the two interests. Or something.

You can try to get one of the 900 of these that exist when they are released August 2nd. They will be $100. 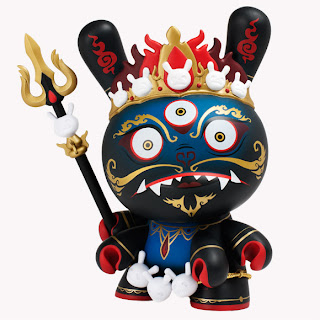