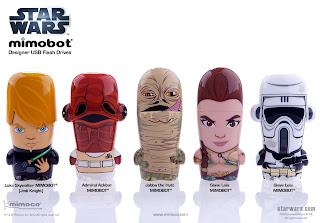 Oh snap, it's more Star Wars stuff for me to buy. Not that I've ever been worried that one day they'll just stop making merchandise featuring the greatest thing in my childhood, but it makes me happy when it's something I actually want and not shampoo or paper plates. Though I do have an original R2-D2 birthday candle, but that was a bargain and too cool to pass up.

Mimoco has just released their newest series of neat-o Star Wars Mimobot flash drives. See, the great thing about these, as apposed to say the aforementioned candle, is that you can collect these AND use them for their intended purpose. Once you light something on fire it's pretty much the last bit of fun you'll have with it and no one saves balls of melted wax because they used to look cool. Well, maybe hoarders do.

The Biker Scout is an exclusive for San Diego Comic Con, but thankfully my two favorites can be bought at any time. Old Admiral "It's a Trap" Akbar and Princess Leia in her metallic beach gear are must haves so I can save all my blog posts on them and show my kids how cool I used to be. Or I'll just fill them with funny cat pictures from the Internet. That's probably a better idea.