Leopard Cavey from A Little Stranger 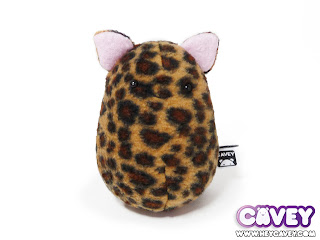 Leopard print is the official pattern of the state of New Jersey.  No matter where you go, someone is wearing it.  I don't know how this happened and in most instances it's fine until you see some orange skinned 80 year old woman wearing an entire sweatsuit of it and animal control won't come out to remove her from the premises.  Then you've got a problem on your hands.

We've featured Cavey releases on the site before but as I've stated above, this one hits close to home.  You can get one of these on Monday, August 27th, which is in plenty of time for the Real Housewives of New Jersey season finale.  Only 100 of them were made, so be ready by logging onto http://heycavey.bigcartel.com/ at 8pm London Time with your credit card ready to go cause these things sell fast.
Posted by Chris at 8:26 AM