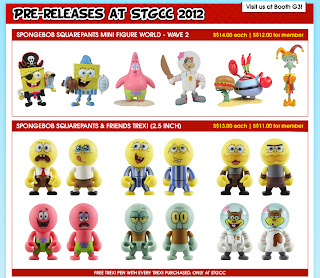 Our friends at Play Imaginative will be pre releasing a ton of stuff at the Singapore Toy, Game, and Comic Convention this weekend, so if you're going you'll be able to get it all first and make everyone else in the world jealous. If you're a Spongebob fan you'll make out like gangbusters as they not only will be selling toys, but also clothing as well.

I like the DC Comics Trexis that are just clear plastic and adorned with the iconic logos of various super heroes. It's as simple as design can get, but when you're working with something like the Justice League, how much more do you really need? The Evirob figures by Devilrobots have always been a personal favorite, so it's nice to know I'll be able to get these after the convention. If you're going, stop by, say hi, and get a ton of new toys. 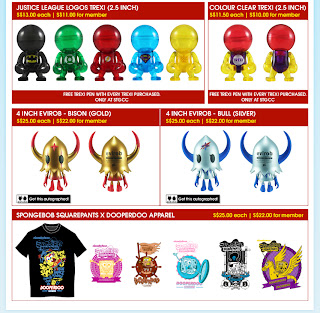