The Cast of Rogue One from Forces of Dorkness 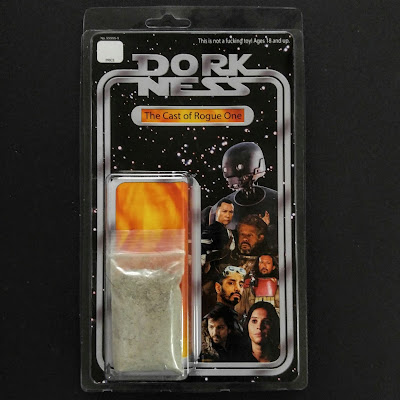 I know the Internet is filled with fake news and alternative facts, but I read the other day that they had to shut a bunch of rides down at Disney Land because someone spread a dead relative's ashes on them.  I don't know how this all went down, but I'd like to think they got into the front seat of Splash Mountain, threw their hands in the air, and just let the wind do the work.  That way it's just like they were taking one last ride on all their favorites, while anyone sitting behind the mourners spent the rest of their day picking charred human remains from their eyelids.  It really is the happiest place on earth!

In case you haven't noticed, neither Jyn Erso nor any of her esteemed rebels from Rogue One made an appearance in the original Star Wars waaaaaay back in 1977.  That's because they were all roasted.  Oh dang, I forget to yell "spoiler alert."  Though I'm sure if George Lucas was still involved in the storied franchise he would have found a way to digitally insert their ghosts into the original films, causing my head to literally explode as if it had been fired upon by the Death Star.

Forces of Dorkness has created the ultimate collectible for the Star Wars fan in your life with this bag of ashes from the characters.  Who exactly your mixture will contain is a complete mystery and thats half the fun!  Pick one of these up right now from http://forcesofdorkness.storenvy.com.