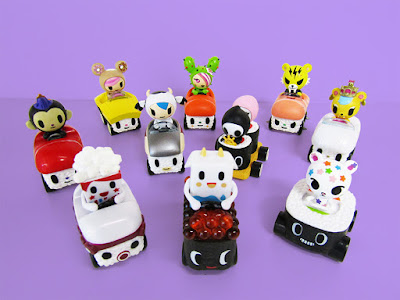 Which of these two scenarios do you find to be the most dangerous:  eating sushi that you bought from a gas station, or filling up a car made of sushi and speeding down the New Jersey Turnpike at 80 miles an hour?  Either one will most likely end in your demise, but the first one would be much slower and more painful in areas you didn't know could hurt so badly.  Go ahead and try to find such poignant discussion on any other toy site.  We're expanding minds here, people!

A real life car made of raw fish and rice is probably not the best idea, but in the world of tokidoki it makes perfect sense.  You didn't expect an array of characters such as this to be putzing around in a Lincoln did you, especially not after those creepy Mathew McConaughey commercials.  Cute folks drive cute cars no matter if you can figure out how the mechanics would translate into the real world or not.  They don't need engines, because they are obviously powered by adorable.

These blind box speedsters are available now at www.tokidoki.it and wherever designer toys are sold.

Email ThisBlogThis!Share to TwitterShare to FacebookShare to Pinterest
Labels: Tokidoki