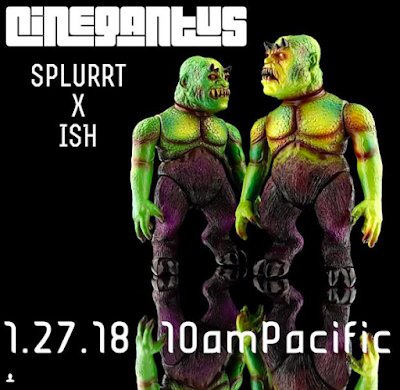 Whenever you are presented with the opportunity to sever the head off of one mythical creature and place it on the body of another you should always do it.  Of course you would want to have both mythical creatures fill out the proper paper work to absolve you of any liability should the whole thing go terribly wrong in a Frankenstein sort of way, but that's stuff any mad scientist should already have been told by their lawyers.  In a world run by scandal and litigation you have to protect yourself from the inevitable get rich quick schemes and accusations of malfeasance that can plague even the most well-intentioned experiment.  A good insurance policy never hurts either and can pay for itself the first time you use it.

Splurrt's Harryhausen-esque Cinema Monster has had his noggin replaced with that of Justin Ishmael's Galligantus to create Dun Dun Duuuuuuuuuuuuuunnn......Cinegantus!  No one is safe when people are out there making super monsters, but safety is a relative thing anyway like I told the person who tripped on the walkway in front of my house.  I'm not sure if he understood me because his replies were muffled by his detached teeth and blood, but I think he saw the folly in his reasoning by the time he passed out and I drug him next door to the neighbor's sidewalk.

Lulubell Toys will be releasing what I'm told is a really really limited amount of these on Saturday, January 27th at 10am pacific time.  They are $200 each and sold blind and you can only buy one so don't get all greedy about it.  They will be available from www.lulubelltoys.com.