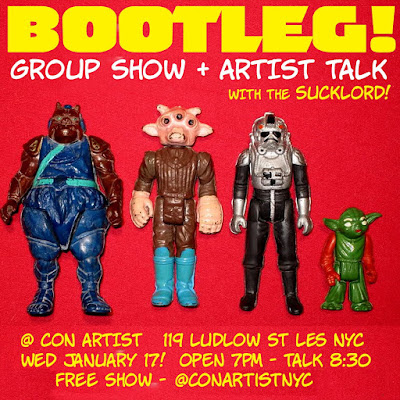 Who scheduled this artist talk event with The Sucklord on a Wednesday?  The Sucklord should be experienced on a weekend, where you can sleep in after a night of absorbing all of his knowledge/cheap alcoholic beverages.  Most likely when you do wake up it will be in a place that you don't recognize wearing pants containing the wallet of someone you don't remember meeting.  You'll be scared at first, until you realize that what you've been a part of will be a story your grandchildren will beg you to tell them over and over.  And most likely the police as part of a large scale investigation, so it's best to have a lawyer on retainer before anything happens.

If you've ever watched The Sucklord's video pod cast thingy then you know he's by far the most entertaining person in the whole art toy scene.  He's unfiltered, hilarious, and at times pretty insightful. So if you were supposed to go to work the day after this artist talk (everything you need to attend is right there in the picture) then you should probably be prepared to call in sick.  I'll be happy to sign your doctor's note.  Just make sure you block all of your coworkers from your social media.