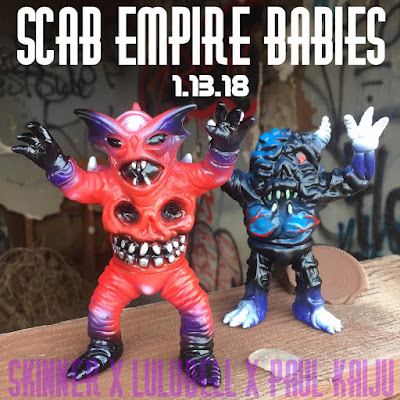 Back in the day if someone told you they had minions to do their bidding you'd imagine some dirty little cretins who lurked in the shadows and had low credit scores.  Now because of a very famous  animated film series all anyone ever thinks of are those yellow pill shaped critters who speak a language that makes Sylvester Stallone sound like a refined English gentleman.  Behold the rise of the Scab Empire, which sounds way grosser than the Empire Darth Vader was running.  Seriously, who wouldn't rebel against the Scab Empire, it's not the most appealing name to write on checks when paying your taxes.

Skinner and Paul Kaiju have resurrected their evil little sofubi bay bays and are offering them up as a set this Saturday, January 13th through Lulubell Toys.  For $80 you get both because separating them would be a crime against minion kind and also because what kind of cruel freak would do such a thing?  They grew up together, raise hell together, and they'll be mailed to your house together and that's just the way it is, cowboy!

The adoption line forms at https://www.lulubelltoys.com.