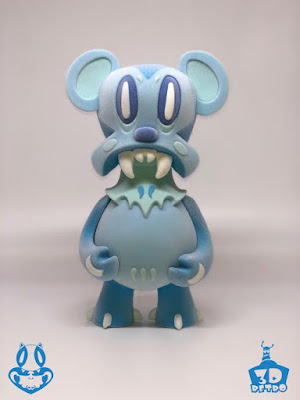 I'm very conflicted about this Lava Bear colorway.  He's called a Lava Bear, but he has a frozen motif going on.  Volcanoes don't erupt ice flows and glaciers aren't made of magma, so my head is spinning like that one time I hit it on a shopping cart.  Don't ask how that happened, not because it's an embarrassing story, but because I hit my head hard enough to not comprehend how things went down.  Or to give a more recent example, when I found out that there is a town in New Jersey called West New York.  What is that?  How can you even write that down somewhere without feeling weird about it?  I'm seriously working myself up into a panic over this.

Nathan Hamill has burned out my mental cylinders with his willingness to spit in the face of nature,  but his addition of flocking has has swayed me to the dark side.  Yes, this is the first toy that he's ever made that's fuzzy!  But only 75 of you will be able to experience how great it will feel petting one of these, because that's all he made!  You'll get a shot at new toy ownership this Friday, February 2nd at noon pacific time.  Eighty bucks will get it done and they're only going to be available from http://nathanhamill.storenvy.com.  In the meantime I hope Nathan avoids all prosecution for witchcraft in his attempt to sway the natural order of things.  Don't act like you'd be surprised if we all of a sudden started burning witches again in this country, because things have taken a rather crazy turn for the worst this past year.