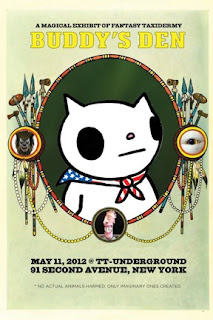 Craigslist is a wonderland for buying weird stuff from even weirder people. Sometime last year I found a pair of taxidermist ducks on said website and thought they would be something neat to add to our cabinet of curiosities (which has spilled out into whatever spaces aren't occupied by toys). So my wife and I go and meet this woman who was about 80 years old and had a farm house filled with animals that had died there and she couldn't bear to part with. Somewhere along the lines she learned how to stuff 'em herself so they could always be with her. It was kinda sweet in a strange, Silence of the Lambs sort of way. You don't get to meet people like this at the mall.

Buddy's Den is apart show happening this Friday at the Toy Tokyo Underground in New York. All of the artists created fake works of taxidermy that are supposed to be part of Buddy's collection. Sounds pretty neat to me and you have almost zero chance of being made into a piece of furniture like I feared I was going to be when I had my lone experience with the taxidermy world. 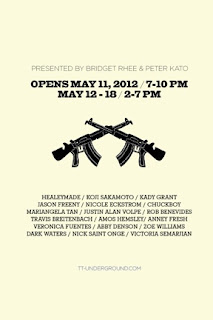