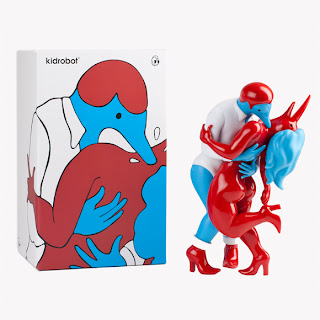 This toy makes me mildly uncomfortable. I think what's doing it, other than the fact that the blue guy appears to be a vampire and drinking the red chick's blood, is the giant red monkey butt. It brings back all of the memories I have of going to the zoo and some inappropriate monkey doing something equally inappropriate to live up to his billing. And they're so proud of their hairless butts and want to make sure that no matter when you take a picture, their bare hind parts are prominently featured. Curse you monkeys and how you lure us in with your cuteness, only to shock us with your horrid behavior.

This toy was made by Parra, stands 10 inches tall, and was made in conjunction with Kidrobot. It's $150 and comes out June 7th. I can honestly tell you it's not my cup of tea, but if you like it that's ok and we can still be friends. I just might not come over to your house for book club anymore. 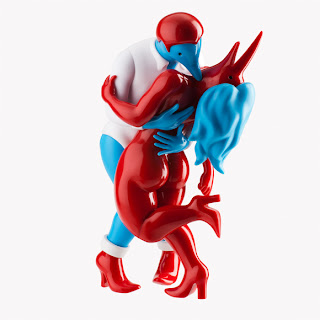