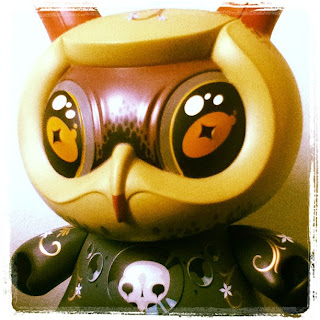 It's that time again kids, where I tell you about the things I spend all my money on. This time it's Jason Limon's 8 inch Dunny from Kidrobot. Let the festivities begin.

1.) Where is this on display in your house?

It was a tough decision on where this would go, because honestly, I'm running out of space. Right now he is sitting next to my computer because I feel his presence makes me smarter when I'm typing. Plus his ever watchful gaze keeps me away from websites I shouldn't be looking at. He's so judgy.

2.) How does he rank as far as your other toys?

Hmmm, well I do like him quite a good deal, because he is very different from other things I have. But I don't like to play favorites just in case they come to life and all gather at the foot of my bed one morning. I can save my life from their obvious homicidal intent by saying "hey, I always loved you guys equally" and sending them into a spiral of shame in which they all apologize for waking me and then go and vacuum the stairs. Doing my chores definitely makes up for them trying to recreate the Puppet Master films.

3.) What are your thoughts on him in general?

I feel that this Dunny could be my spirit guide on a particularly harsh peyote (drugs are bad) trip in the middle of the desert. Not that I've ever been in that sort of situation, but if I were to find myself wandering naked and reciting the Declaration of Independence with the 1919 Chicago White Sox, this little bro could probably calm my nerves. That, or he'd be the thing that pushed me over the edge and into a lifetime of electro-shock therapy.

I should clarify this question for those of you that are unfamiliar with my cat Icarus. He has a disorder called Pica in which he eats a lot of nonsense that is in no way, shape, or form, food. Shoelaces, socks, drywall, you name it, he's tasted it. Other than the occasional trip to the emergency vet to dislodge foreign bodies, it gives an exciting, almost archaeological, quality to cleaning out the litter box. As of yet he has been kind enough to not eat our toy collection. That probably has more to do with keeping it away from him than any courtesy on his part.

So there you have it, another amazing review from yours truly. If this doesn't make you want to go on eBay and hunt this sucker down, I don't know what will.