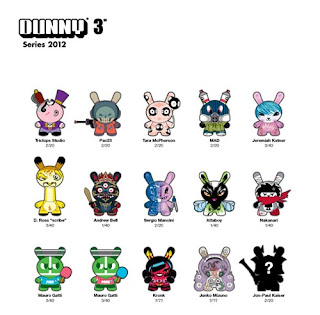 It happens every year. How it happens only a few folks would know, but it does. Each year there is a "leak" of the next series of Dunnys well before Kidrobot announces them. Is there a mole? Is it a ploy of the marketing department? Hard to say, but here is what you have to look forward to when they are released later this year. There is a nice mix of the artists we all expect to be involved, such as Tara McPherson, MAD, and Triclops. But there's also a lot of Dunny newbies, like Jon-Paul Kaiser, Sergio Mancini, and Nakanari. Hopefully the official release date will be announced soon, cause I'm ready to increase the size of my collection ASAP.