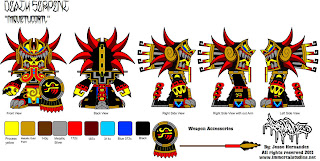 Jesse Hernandez packs so much detail into his toys that I've noticed things years after acquiring them that I didn't see at first. Sometime's I think it's because I suffer from a massive case of adult ADHD and I can't pay attention long enough without my mind wandering to bunnies, or the Republican Party. But I also think it's because the man is just so freakin' talented that his toys are able to be continuously fresh.

Jesse has teamed up with Kuso Vinyl to produce what may possibly be the coolest toy he's ever made. This is the Death Serpent, or Miquitzticoatl, and this dude is sick. Even though he would scare away anything that even thought about crossing him, he still comes with a spear and shield just in case someone isn't smart enough to run. No word on a price or release date yet but since pictures of the sculpt are floating around online I'm sure it will be soon.