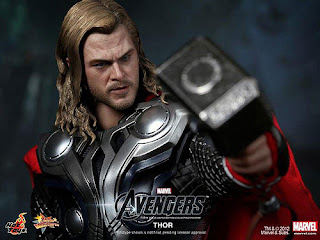 I would dare say that Thor has to be the most successful of all the old Norse gods. None of the others have been able to find such steady work after that whole Ragnarok thingy. Sure, Loki, Odin, and a bunch of the other guys from Asgard have had some work from Marvel, but Thor is making serious bank. Just check out this new figure from the people at Hot Toys. It's $200 and you know he's getting a piece of that action. And to think, he wasn't always thought of as the smartest of folks in Asgard. But when it comes to making money, the god of thunder has a financial sense that is as deadly as his hammer.