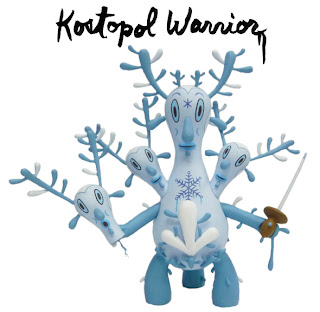 Have you ever seen that movie Troll Hunter? It's a Norwegian film about, well, hunting trolls. You learn all sorts of things about them in the movie, like the different types, what they like to eat, and that you should probably stay out of the woods if you know such things are lurking about. What does this have to do with anything you ask? Maybe I was just trying to to give you a nice movie recommendation. Or maybe I feel that the critter pictured above could be stalking the Arctic tundra as we speak, looking to nibble on unsuspecting Scandanavian campers.

This is the second Buckingham Warrior from Gary Baseman and The Loyal Subjects. This one is called the Kostopol Warrior and he is actually not a troll at all, but based on real events that took place during World War II involving Gary's father in Poland. That's some pretty heavy stuff and it makes me curious to hear the whole story. You could get this unique figure right now for $120 by clicking here.