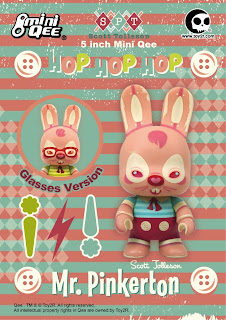 My wife wants a rabbit. We have 3 cats but she's been obsessed with the idea of getting a bunny to go along with them. I'm not necessarily opposed to the idea, cause I love animals and all, but I know what's going to happen. She's gonna snuggle it and think it's cute and play with it and anything involved in actually keeping it alive is going to be my job. I clean up enough poop as it is now and I don't know how much more time I can dedicate to the bowel movements of fuzzy critters. Maybe I can get her one of these guys instead. The cleanup certainly would be easier.

Scott Tolleson and Toy2r have joined forces to create these Mini Qees named Mr. Pinkerton. They come in two different color schemes, the option of having it with or without glasses, and features the classic American styling that Mr. Tolleson is famous for. I would imagine they will be $28 each since most Mini Qees are priced that way. The blue one reminds me of Dennis the Menace. I feel old. 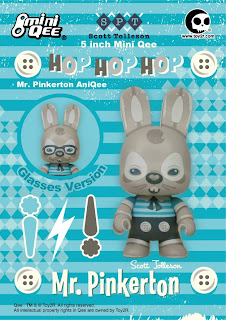