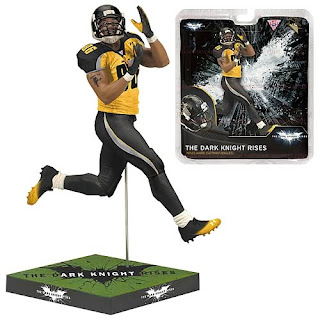 Ok, I haven't been into sports figures since I was a wee little Viking who had a love of Starting Lineups. I still have every one of them that I ever owned and while they used to be worth quite a bit, they are now easily found at just about any Goodwill or flea market. If I were ever going to buy a sports figure again this would have to be it.

McFarlane Toys has created this figure of Hines Ward from his appearance in The Dark Knight Rises. He plays for the Gotham Rogues football team which has been featured prominently in the early trailers for the film. Available this October, it will retail for $12.99.