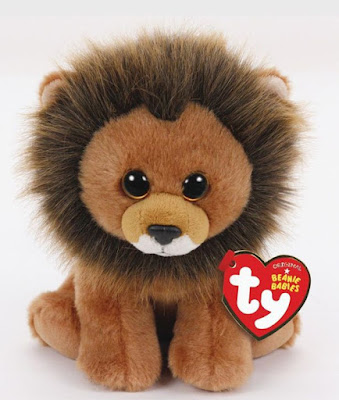 Yeah, I know, Beanie Babies aren't necessarily tops on my list of things to write about.  But there's nothing that angers me more than people hurting animals so they can feel better about their own short comings (if you get my drift).  The fact that such an act is listed as one of the primary traits of serial killers shouldn't surprise anyone, cause you have to be pretty sick to kill something as beautiful as defenseless.  I've never understood big game hunting, probably because I'm not mentally stunted, and after hearing about Cecil the lion I have been sick down to my very soul.  Sick to think that a fellow human being could do such a thing and even sicker in the pride they feel in it.  So yeah, I'm writing about Beanie Babies today because that's how far my disgust has taken me and it's the only action besides strangling the idiot that killed this magnificent creature that may make me feel slightly better.

Next month TY is going to release a special stuffed critter to commemorate Cecil and raise money for WildCRU, which is Oxford University's Wild Conservation Unit and were the folks that were studying the lions in that area.  100% of the proceeds will be donated to them to continue their research into saving the world's endangered species.  At only $5.99, everyone can easily afford to buy one of these and help out a most worthy cause.