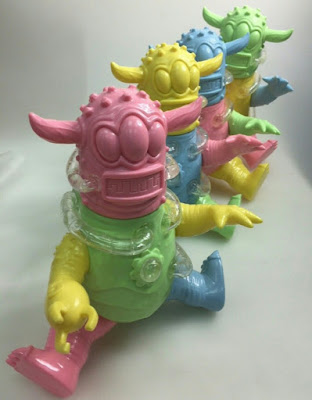 The MTV VMA's were on as I was writing this post.  Let me clarify, they weren't actually on MY tv at home, but supposedly they were on someone's, which makes me sad for them.  The only reason I even knew it was airing was because of those ridiculous commercials with Miley Cyrus and her tongue all hanging out, trying to be edgy, or whatever it is that mall kids aspire to be these days.  I wish someone would make clothing that she likes to wear so she can stop showing off her 13 year old boy's body like its something anyone wants to see that isn't already in jail for sex crimes.  Do they air MTV in prison?  They should make you watch it on death row so you stop appealing and start begging for the electric chair.

I haven't watched the VMA's since Nirvana played on them.  And if you're like me and couldn't care less about who wore what on the red carpet or what dumb thing Kanye West did, you could instead focus your attention on securing one of these mixed parts SMD5 figures from Jeff Lamm and Unbox Industries.  What color combo will you get?  Who knows, cause that's a surprise, and it won't matter anyway cause the figure is so sick that they could make a color scheme called "scab" and it would still be awesome.  These are on sale right now and will be until September 6th or until supplies last.  Snag one for yourself or your favorite internet pseudo-celebrity (no, not Grumpy Cat) by going to http://store.unboxindustries.info.
Posted by Chris at 5:33 AM