I am convinced that the work of Plaseebo could transport you into an underlying world where the mad visions of HP Lovecraft are the norm and its all your brain can do not to explode upon witnessing it.  Everything from the paint schemes to the glow in the dark elements to the LED lights work together to conjure up visions of things that cannot be unseen.  Or they just look really cool in your display case and I am the victim of an over active imagination.  Either way, they're still mesmerizing to look at.

Tomorrow, August 14, there will two new one off custom figures released in his shop.  The first one you see up there consists of Plaseebo's own Gnaw head mounted on Skull Head Butt's X body, and containing a motion activated LED light that changes color.  Signed and dated, that sucker will be available for $350. 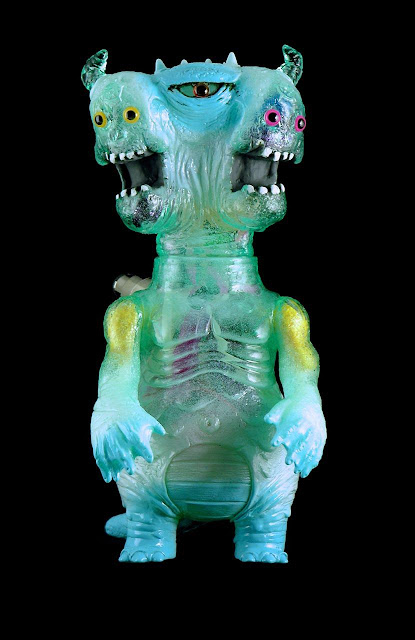 The other part of this release is this AntiChrist 666 figure from Frank Mysterio.  He's filled with tons of guts and 3 motion activated LED lights to make this guy shine like the unholy terror he is.  He also comes signed and dated.  Both of these custom figures will only be available from http://www.plaseebo.net.