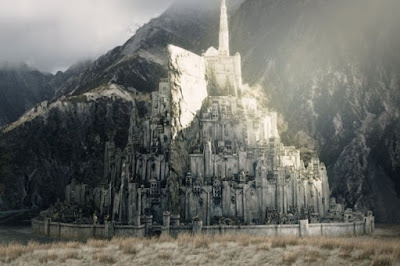 How many times in your daily life are you forced to drive by another pile of garbage being built that will in a few years time sit abandoned like the bad idea it was?  Every day I pass by this relative ghost town on the way to work that has now decided to build a strip mall.  Never mind the fact that most of the houses sit vacant, or that the only other two businesses for miles are gas station on either side of the road and a produce stand that looks like it was but as a set for the next Mad Max film.  Nope, despite the obvious warning signs by the buzzards circling overhead, what that town needs is a nail salon, a pizza joint (cause you can't find one of those in New Jersey) and another place to buy a cell phone.  Oh joy!

But this is a construction project I can get behind!  Finally, someone in this world has decided that enough is enough and cookie cutter housing developments and retail establishments have had their time and now we need to pave the way for something new.  Something, like Minas Tirith!

The great city from Lord of the Rings has been proposed to be built somewhere in southern England, but it needs your help (and a lot of cash) to become a real, livable city.  It's a definite uphill battle, as they need to raise billions of dollars for the project to commence construction.  You can help by checking out the Indiegogo page here and by maybe convincing Bill Gates or Warren Buffet that this would make a pretty baller investment.  Meanwhile, I'll be packing all my things to be ready for move in day.

Email ThisBlogThis!Share to TwitterShare to FacebookShare to Pinterest
Labels: Lord of the Rings