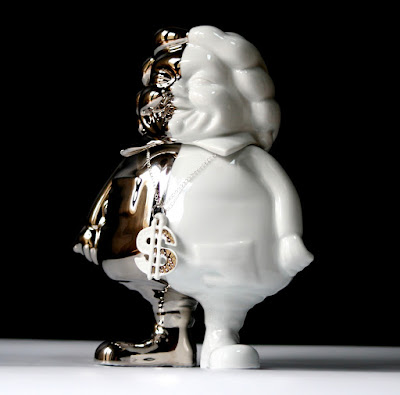 Oh snap, look at that big old hamburger king!  He took so much money from you in exchange for hid diseased meat that he's gone and covered himself in platinum!  See, I never understand why people trust clowns.  When has a clown ever tried to get you to do anything and the results were good?  John Wayne Gacy was a clown and we know how all that turned out, so I guess a certain fast food clown's crimes against humanity aren't that extreme.  He at least doesn't kill you right away.

I can't act like I don't appreciate fast food every once in a while.  Usually that appreciation ends the moment I realize what a terrible mistake I've made, but what can you do.  Is there a more grandiose ode to the king of instant gratification than this MC Supersized by Ron English?  Certainly not, especially when it's cast in porcelain by K. Olin Tribu and decked out in platinum.  He's available right now to lend your house some fanciness while simultaneously making a cultural statement.  Kind of like the way I saw myself in my teenage years.  Minus the fancy part, cause my jeans all had holes.