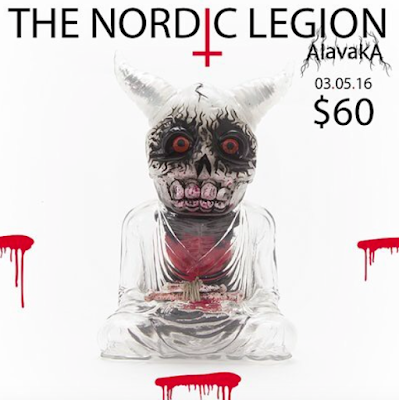 It makes me sad that music doesn't freak people out anymore.  Teenagers today will never know the joy of wearing a bands shirt that was scary enough to make people cross to the other side of the street.  Not that this is black metal related, but I remember going to see Marilyn Manson during the time when people actually gathered outside of his shows to protest them.  It was in Richmond, Virginia and while we waited in line to get in people yelled at us and threw things and there was even a local news station that was outside filming it all.  The reporter came up to me and started asking questions about why we were there and what attracted us to his music, and 17 year old me leaned into the mic and calmly said "we're just here to see a damn good rock concert."  It certainly wasn't the blasphemous rant he was hoping for and I made sure I stayed calm to let the idiot protesters really look like the savages of the whole affair.  It was a cool moment for me.

I had yet to be exposed to the craziness that was going on in Norway at the time that was making Marilyn Manson look like Captain Kangaroo in comparison, but the music eventually made its way to my ears.  It's still unlike anything else you could even think to compare it to and now you can celebrate the madness with your own Nordic Legion Alavaka from Devil's Head Productions.  Decked out in corpse paint and blood, this figure will bring the northern darkness to all it touches.  Available starting Saturday, March 5th, only from http://devilsheadquarters.storenvy.com.