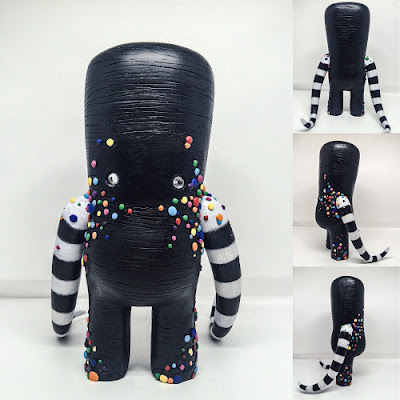 Let me go on the record as saying that every sweet snack food is made better by adding sprinkles.  I went to Dunkin Donuts once and asked for a strawberry iced one.  The dude behind the counter proceeded to grab one without sprinkles, while there was a whole pile of them covered in technicolor bits of sugary goodness.  What kind of psychopath would deliberately try to sell me some naked donut while the option for sprinkles was sitting right next to it?  I thought it was obvious that he'd give me a sprinkled one because he valued my business and didn't want to get shanked, but no, he thought he was gonna pass of some garbage like I wasn't even human. No, I do not regret setting that fire, let me tell you.

This first edition Koralo from Kyle Kirwan obviously knows what's up when it comes to pastry, cause he looks like he just housed the best cake of his life.  The debut of this seven inch tall resin figure is slated for Friday, March 11th, at noon eastern time.  It's an edition of ten and each one will sell for $65 only from http://www.kylekirwan.com.