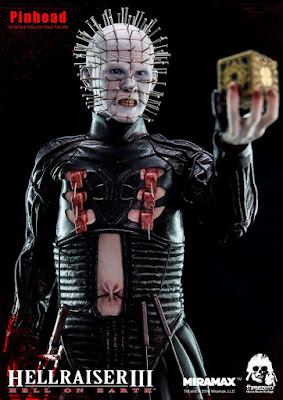 This is Pinhead, who quite frankly is one of the freakiest looking things on the planet.  My wife and I used to go to horror conventions a lot when we first started dating and one of the people we met was Doug Bradley, the actor underneath all the makeup and roofing nails.  He's the nicest unassuming British guy who you never would suspect would be the face of terror for children and adults all over the world.  It's always interesting to meet the people that play such characters because then you realize how much talent they actually have in turning themselves from everyday dude in sociopathic otherworldly murderer.  Either that or they're really good at hiding how twisted they actually are, which could be a good premise for a horror movie itself.

Ol Pinhead's looking a little too realistic in this figure from threezero.  This 1/6th scale figure is the first in a line of Horror Movie Heritage collectibles, so you're not going to want to miss this debut.  He's up for preorder right now on http://www.threezerostore.com and he comes with interchangeable hands, the infamous puzzle box, and enough sleepless nights to usher you into madness.