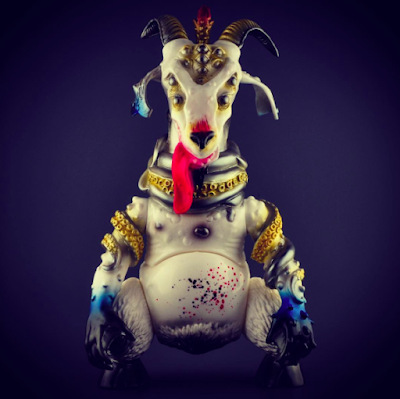 I just watched The Martian movie the other night where those bums left Matt Damon on Mars and he had to become a hipster and live off the land and do everything on Mars before it was cool.  The movie wasn't bad actually, though by only playing one David Bowie song they seriously missed a great opportunity to play more David Bowie songs.  I was impressed by his will to live while facing seemingly insurmountable odds, but if you work for NASA and are smart enough to be sent to another planet no one should really be surprised that you're smart enough not to cry in the corner until you died of dehydration.  Maybe they should have made him panic and forget all of his training as he uses his time to try and fashion music instruments and form a David Bowie tribute band. I wouldn't have seen that coming.

Shub Zeroth leaves no man behind, mostly because they are a great source of protein.  He's decked out in a paint scheme from Dski_one and ready for wherever the stars may lead him.  The blackness of space is calling, but you can divert him to your home on June 24th at 10am pacific time only from www.meta-crypt.com.
Posted by Chris at 4:31 AM