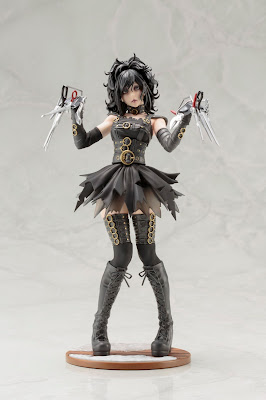 Oh, Johnny Depp is going through it now.  I'm sure he'd rather be in the news for that dumb Alice in Wonderland sequel than his relationship, but the later just happens to be better suited for television.  There used to be a time however, when his creative output could eclipse anything else going on in his life, like when he was the creepily pasty guy Edward Scissorhands.  Kotobukiya is hardening back to those days with this new Bishoujo statue that kind of looks like Winona Ryder taking over the title character.  This goth chick is available for preorder right now from www.kotous.com.

Email ThisBlogThis!Share to TwitterShare to FacebookShare to Pinterest
Labels: Kotobukiya