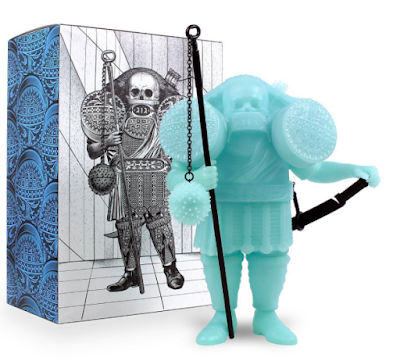 The names Gog and Magog are entwined in the lore of many different places and can even be found mentioned in the Bible.  Their pertinence here is in relation to London, who claims them as protectors of the city.  With a face devoid of flesh and a suit that Genghis Khan would have worn to the prom, this dude looks like he would squash any tomfoolery with his spikey ball thingy and spend his lunch break polishing it to its original shine with your major organs.  So much more effective than Armor All.

This mythological bouncer was designed by one Rob Jones and is based on a gig poster he did a few years back.  Unbox Industries brought it to disturbing life in plastic form and the results are a massive figure that could scare a hyena off a hamburger.  There's three versions of this dude, and Rob has sold out of the first two already.  But you can still own the spectral-like Reyn edition direct from his website by clicking here.
Posted by Chris at 4:58 AM