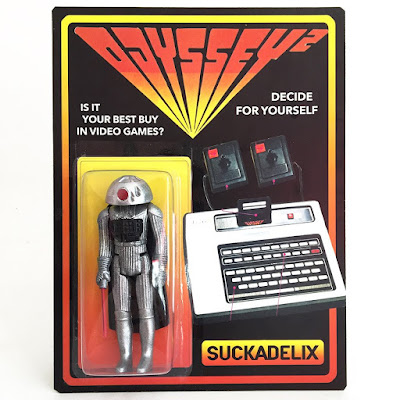 The Sucklord released two new figures this week, but one already sold out so there's no point in me making you fall in love with it just to break your heart the way Jenny did in third grade when she knew you liked her yet kissed Michael by the swing set any way.  I'm no Jenny.  So I'm going to tell you about the one still available for purchase called Odyssey 2.  This is in no way the bangin sequel to Homer's epic Greek tale that we will seemingly never get (Even though it takes Guns and Roses less time to record an album. Step it up, Homer!) but is in fact a tribute to classic video games of the past.  It harkens to a time when somehow people were able to have fun with two pixelated sticks and a ball that bounced back and forth and didn't need things like "sex" or "violence" in their video game systems.  Sounds boring.

Pick this dude up here and never forget how blessed you are to have grown up with Grand Theft Auto.