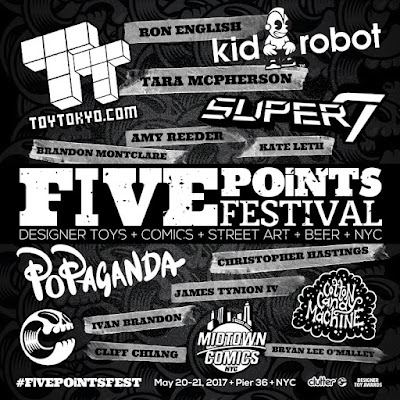 I was pretty excited when I heard about Five Points Fest.  It's like comic con, but it feels more curated and adult in that it's focusing on designer toys, comics, street art, and food.  And the key word there is "curated" because they're promising that there won't be table after table of selling the crap you can buy at Wal-Mart.  Kidrobot, Super7, Tenacious Toys, Lulubell Toys, and more have already signed on and it's also going to be the new home of The Designer Toy Awards.  Sounds good, right?  The event doesn't take place until May, but you can buy tickets for it right now.  VIP tickets even include an exclusive Dunny from Kidrobot and Gary Ham.  Don't be left out, get your tickets now at http://fivepointsfest.com.