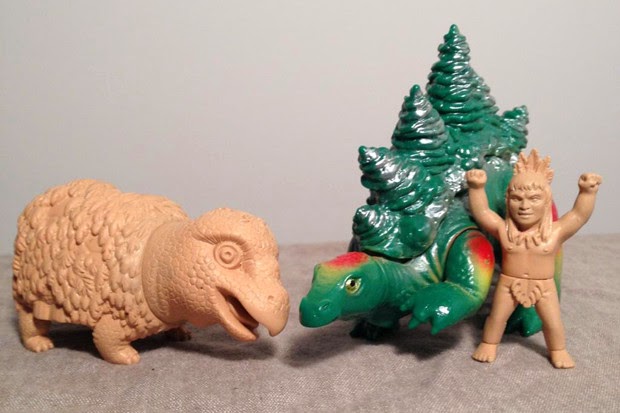 I'm totally detecting a theme today.  If you guess what it is I won't smack you across the lips. You may or may not know Jesse Narens from his previous toy, the pictured Stegoforest, which in my opinion is pretty dang brilliant.  Well, some time has passed since that release and now it's time to make some more friggin toys, and stuff.  Help Jesse raise the funds he needs to make his newest creations a reality by supporting his Indie Go Go campaign.  Doesn't Indie Go Go sound like a hipster strip club?  Anyway, he's launched a campaign to get his new Mossy Kappa and Stegoforest Rider figures made in uber amazing Japanese vinyl, which if you didn't know, is like the platinum of plastics.  Follow this link, buy some col stuff, and help bring these to life.  Oh, and even if he doesn't get the entire amount funded, he's gonna cover the rest of the cash and everyone is still gonna get their toys.
Posted by Chris at 1:00 AM