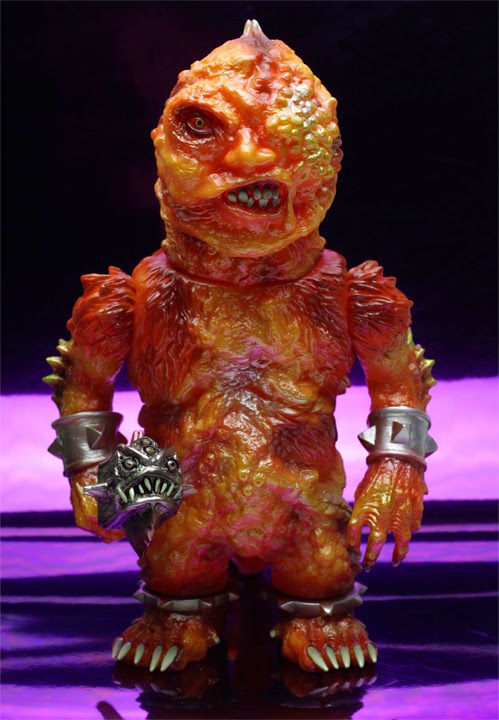 You know whats a weird popular thing online that I don't think anyone ever saw coming?  Zit popping videos.  And these aren't your run of the mill teenage grease pockets either.  I'm talking about giant-sized, cottage cheese gushing skin maladies that would challenge even the strongest stomach to get through.  Some of these videos have views well into the millions, making them on par with a new Taylor Swift video, and just about as watchable.

Just once I'd like for them to open up some giant growth on a dude's neck and have Toxigon pop out.  He looks like he'd be quite comfortable marinating under your skin until he was ready to wreak his own special brand of havoc on the world.  This "Toxic Goldfish" paint scheme really makes him look like some crazy biological anomaly that will one day have it's own daytime television commercial asking anyone who has experienced giving birth to a Toxigon to call some phone number and join a class action lawsuit against the makers of some new drug after it is determined that this crazy demon dude is the side effect of those pills you take just to be able to leave the house everyday and not freak out on people.

"Have you or someone you know taken the drug Prozac and as a result had a terrible hell spawn climb out of a skin blemish causing you extensive personal damage as you try to be the best parent anyone has ever been to such a hell-spawn even though his taste for flesh and vengeance on an unsuspecting world was greater than your capacity to love?  If you answered yes, you may be entitled to compensation.  We have lawyers who are also demonologists ready to take your case."

Getting one of these beasts is actually a lot less painful than having one grow on the side of your neck.  You just have to enter a lottery and cross your fingers that you get picked.  Starting today (Friday, December 12)  at noon eastern time and lasting until tonight at 11:59pm eastern time, you can enter your pertinent details at http://www.mutantvinylhardcore.com/.  There are only 25 of these dudes to go around, so the winners will be announced on Saturday and invoiced for the price of the figure, which is $200 plus shipping.