Whiskers of the Undead from Aesop Rock x Kidrobot 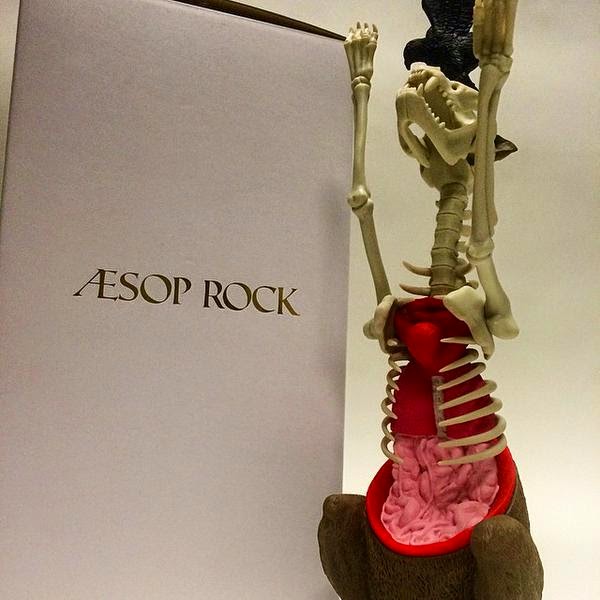 I'll be the first to admit, I had never heard the music of Aesop Rock before.  Truthfully, I haven't really paid much attention to any rap after Dr. Dre and Snoop Dog in the early 90's.  That was back when rap would teach you about the crazy things that were going on beyond the perfectly manicured lawns and lemonade stands of suburbia.  It was an entire side of life I didn't know about and I found it fascinating.  My most influential musical times happened during the height of metal bands like Metallica and Slayer and then the whole grunge thing came along and I was really into that because it echoed my feelings as a teenager.  Rap music at the time was really similar when you think about it, it was just from a different cultural point of view.  The angst and alienation was all there, only it's manner of expression was different.  Now it seems like most of what passes as "popular" hip hop is only focused on how much material wealth the singer has or about how they're the best at what they do.   This self-aggrandizing is perfect for the generation that grew up with selfies and statues updates about what they're eating for lunch, but it is lost on me.

I decided if I was gonna post about this toy I should know a little about the guy behind it, so I did a tad bit of internet research.  I listened to a few songs on iTunes, read a little bit about him on Wikipedia, and I was pretty impressed.  He seems like a thoughtful artist, someone who is not only a clever wordsmith but has the ideals behind those words to make his work compelling.  And he apparently likes cats, which is a big plus in my book.  So now let's bring it back around and talk about the feline specimen you see above.

Aesop Rock and Kidrobot are set to release this "Whiskers of the Undead" figure tomorrow and to say it is a striking piece would be to sell it far too short.  Artist Galen McKamy's hard work really shows and is beyond what you'd expect outside of their Black series of toys.

Now, something this intense doesn't come cheap, and at $250 it may grind your Christmas shopping to a halt, but that's why credit cards were invented.  Undead kitties need love too, ya know.