Blueberry from Kidrobot x Yury Ustsinau is Coming for Your Soul 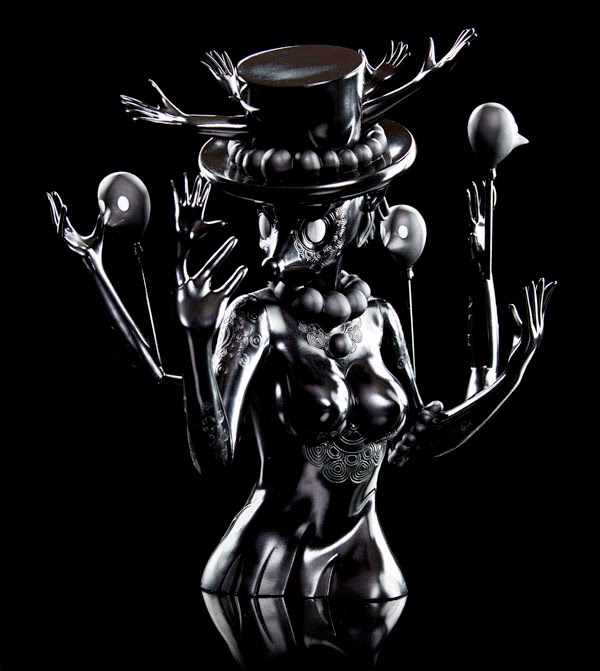 This thing kinda freaks me out.  It's like the alter ego of a serial killer terrorizing the Louisiana bayou.  And it's name is Blueberry, which is totally murderous.  If this was a movie, the main character would have stumbled upon this statue in a voodoo shop and being mysteriously drawn to it, is compelled to buy it.  After bringing it home the statue begins to take hold of his mind, transforming him into a monster.  He goes on a killing spree before finally being gunned down by a once skeptical cop and an oddly attractive nerd girl who figured out what was going on because of a sub thread on Reddit.  At the end of the film the statue is seen back in its place at the shop, appearing as if it never left.  And yet again, Hollywood has not called me.

Of course this statue, however frightening you may find it, is just made of plastic that is most likely not infused with evil spirits.   It's the latest release from Kidrobot's Black collection and was designed by artist Yury Ustsinau (whose other work is equally effective at not making you want to be alone in the dark).  After spending a considerable amount of time floating on a cargo ship in the Pacific Ocean due to a labor dispute, this new centerpiece to your collection is finally ready to enter your home and possibly transform your psyche into that of an ancient demon/killer thingy.  But probably not really.

Get one for yourself when they are released March 26th at www.kidrobot.com, Kidrobot locations, and your favorite designer toy stores.
Posted by Chris at 10:16 AM