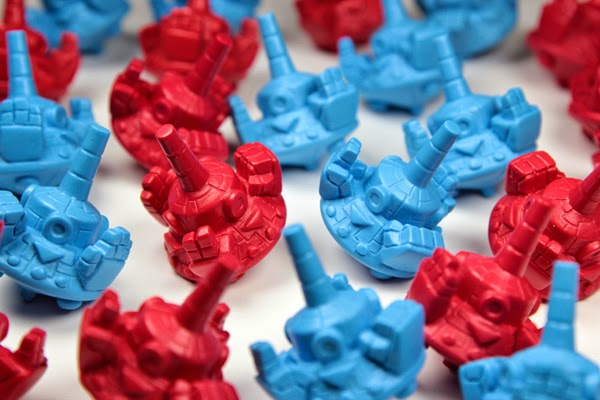 Most of the time when I get a new toy the greatest feeling is actually acquiring the item.  I'll sit with it for a while, admire its craftsmanship, rejoice in the fact that I now own it, then it's off to wherever I can find room for it.  After that it lives out the remainder of its days either behind glass or on one of my many shelves.  It's kinds sad when you think about it, but I am an American and we do like to imprison any and everything we can, whether it's people, or animals, or inanimate objects.  I think it's some mutated gene from all the beef hormones we ingest.

But what's this?  A toy that will never collect dust because you're too busy spinning it in some advanced game of rock, paper, scissors?  Kevin Nam from inami toyland  has released these before, but since then he's gone on to make improvements in design.  These will be available today from myplasticheart in either red or blue and are limited to 10 pieces of each.  Buy em in pairs and make a friend the old fashioned way: by beating them at games of chance and never letting them forget it.  Maybe that's why I don't have any friends.