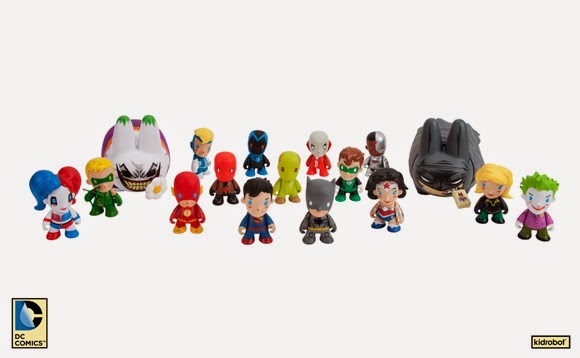 My poor kitty Wednesday is sick.  She's got really long hair so she frequently gets hairballs and I think she may have one stuck somewhere in her digestive track.  We're going to the vet later today so instead of pacing around the house and making myself sick with nerves I decided to share new toys with you.

Back with another sudden release, Kidrobot is unleashing new toys tomorrow based on characters from DC Comics.  There will be a mini series featuring many of your favorites, but the real stars of the show are the Batman and Joker Labbits.  I've been coveting these suckers for well over a year and wouldn't you know it that they come out the day after I have to pay what I'm sure will be a huge vet bill.  I'd do anything for my cats though, so while I may not get them tomorrow, I'm sure I'll get em eventually.  They're both the 7 inch versions and will retail for $59.99, while the mini series of figures will be sold via blind box and will cost $11.99 each.  They will be available starting at 10am MST on www.kidrobot.com.