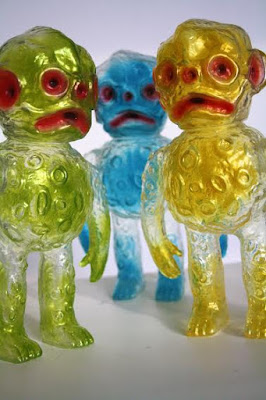 You wanna make the world's shortest horror film?  I'm gonna write the story here in this post, all you've gotta do is actually film it.  Let's set the scene:

A man in wife are in bed together.  She is fast asleep, while he is in and out of consciousness.

He opens his eyes, and sees the vague impression of the three above figures in the dark shadows against the wall of their room. Thinking he is in the middle of a dream he closes his and tries to fall back asleep.

He opens his eyes once again and now they are closer, surrounding the bed and intently staring at him.  He is allowed a mere gasp before they descend on him.

The next morning the wife rolls over in bed to awaken her husband and instead of finding him that side of the bed is covered in slime.

(This is the point where you applaud and give me an Oscar.)

This dude from Skull Head Butt ( I love that name) is kinda freaky but thankfully they don't ooze all over the place like they toy they're paying homage to.  I've got enough things leaking around the house without the toys doing it too.

These suckers are blind bagged and there's three different colors you could end up with.  Here's how you can get in on the lottery to win the chance to purchase one:

Those interested in bagging the figure are going to need to fire over their name, Instagram name (if you have one), country, shipping address, phone number and PayPal address to kaijumonstergallery@gmail.com before close on Thursday, February 18th… Good luck to all who enter!" 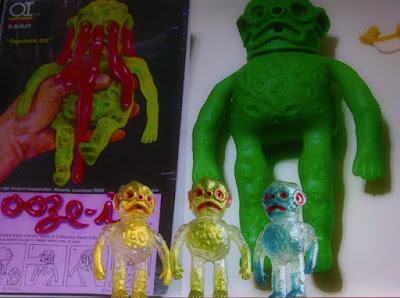