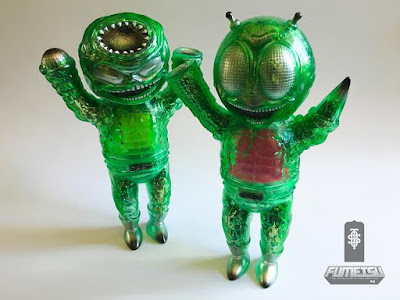 If you ever needed glasses as a kid you know you were freaked out that you'd end up with thick lenses.  Nobody wants to be referred to as "Coke Bottles" but you know that it happened.  If it wasn't you then it was someone else whose ocular deficiencies were on display for public ridicule.  One day I'm gonna write a story about such a kid, teased mercilessly and asked whether or not he could see the future so many times that he just snaps and becomes this evil villain.  And as an evil villian, who used his crimes to save up for lasik surgery, he one day stumbles upon his childhood glasses and builds a giant death ray with the lenses.  He then spends the rest of his life burning up the people that tormented him like helpless little ants.  It's still a better love story than Twilight.

Now the Coke Bottle look is desirable at last, albeit only as the color of some killer vinyl toys.  For instance these toys we just happen to have right here.  Cop A Squat Toys is about to drop some truth on you courtesy of Fumetsu!!!!!  There are two different sets of figures, with only five sets of each available. These will be $150 per set and there will also be some blank figures available at $70 each.  I know you want these and you're in luck, cause you can buy them today!!!  Six pm eastern is the time, www.copasquattoys.com is the place, and the rest is up to you.  Get on it! 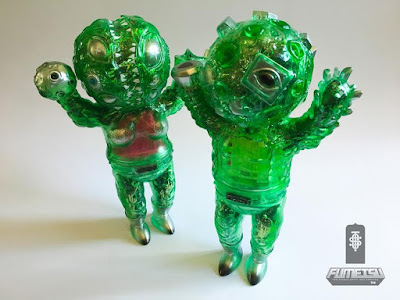