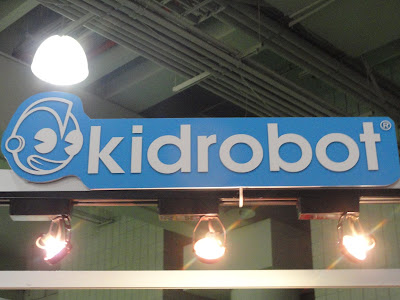 Toy Fair is a weird experience for a website such as ours.  Most of it is filled with stuff for kids and doesn't really cater to the adult collector.  In the days leading up to it we get bombarded with emails from different companies wanting to show us the latest in technology for entertaining toddlers, which if they'd ever seen what we write about they wouldn't want us anywhere near them.  But Toy Fair can still be insightful and a good time for those of us that collect designer toys and my favorite booth to visit every year is the one manned by Kidrobot.

Unlike past years where everything was a surprise when I got there, I had some ideas about what they would be showcasing because of the various teasers that have popped up on Instagram.  Lest you think that diminished my excitement level at all, because two toys in particular had planted their images in my head and I just had to see them in person. 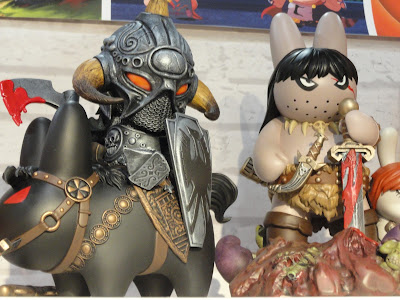 Gaze upon the glory that is the collaboration between Franks: Kozik x Frazetta.  I feel like these two vinyl titans should come with their own fog machine and Norwegian black metal band.  These were the prototypes on display and we should be expecting at least one of them to be available this Summer.  I already have a space ready. 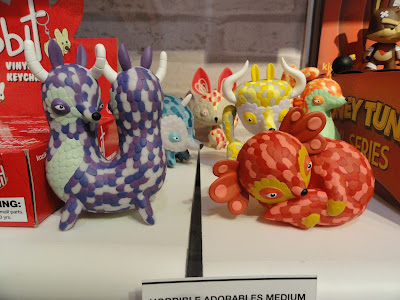 Now for something a bit more on the precious side.  These vinyl renditions of Horrible Adorables felt sculptures are going to be must-own figures for me.  Not only will they look great in any toy collection, but they look like they could be used as accent pieces in some fancy home decor magazine shoot. 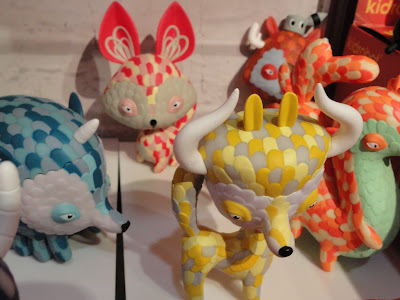 I believe these will be sold in window boxes so you can pick the ones you want, which is obviously all of them. 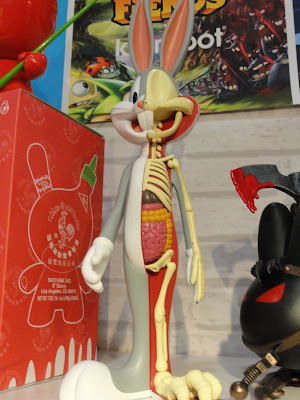 Jason Freeny is a man of curiosity, which is mainly focused on the inner workings of some of the world's most beloved characters.  Soon you'll be able to own this anatomical representation of Bugs Bunny and marvel at all the bits and pieces that make him tick.  I've got a cabinet of curiosities just begging for a bit of humor, and this would look lovely next to the electro shock machine.

(By the way, all of these toys were expertly produced by Klim and his team at Bigshot Toyworks, who are on point when it comes to making cool stuff.) 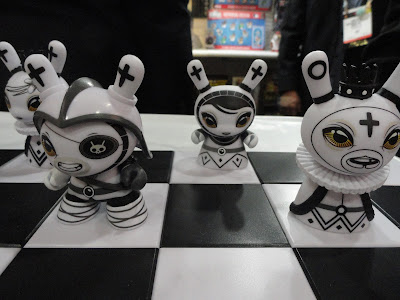 Ok, if you don't own a really nice table top display case yet, let me give you a great excuse to buy one.  This Dunny Chess set from Otto Bjornik is truly a work of art and when you're not busy owning your friends in the classic game you're going to want to make sure it has a place of distinction in your house.  You will be able to buy the pieces in packs of two or you could just skip all that and get an entire set.  Either way, the figures come with squares that form the game board and buying them will probably impress your mom with how much culture you have. 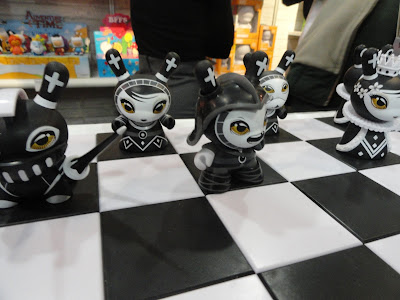 Of course these are not all the new things Kidrobot had on display, these just happen to be my favorites.  There's new stuff coming from The Simpsons, Street Fighter, TMNT and more Labbits and Dunnys than you can shake a stick at.  Have you actually ever seen anyone shake a stick at a group of things?  That whole saying would be way more effective if you saw people doing that.