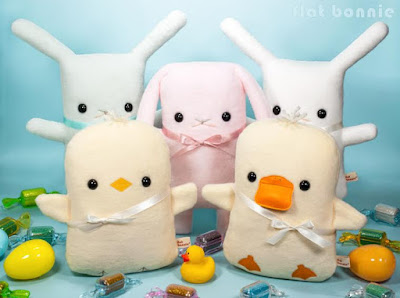 What the hell is wrong with people that they think giving a kid a live animal as a present is a good idea?  Kids are little terror demons sent to punish us, yet every year at Easter parents have the notion that it would be so cute to get them a rabbit to take care of.  The only way that could be a reasonable thing to do is if the rabbit is virtual and lives in an app on their phone, because God bless you if you can get a kid to pay attention to anything else.  There should be a law, but there won't be because of the Illuminati and stuff, so we're just gonna have to put an end to this practice ourselves.

Rally behind the army that is Flat Bonnie, who is spearheading this campaign for reasonableness by encouraging people to adopt a plush critter for their kids rather than a real one this Easter.  For a mere $23 you not only can have one of her awesome creations, but a portion of the proceeds will be donated to helping animal organizations.  That's like doing good twice, which is a month's worth for me. 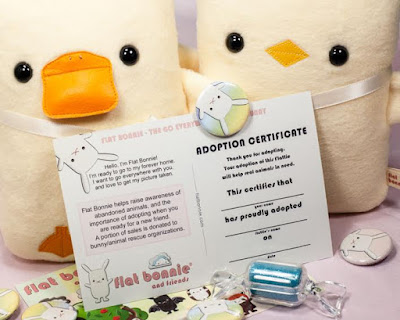 Now by all means if you're a responsible adult who can afford to take good care of an animal then you should give some lucky little fuzzies a forever home.  Open your hearts, but use your head.