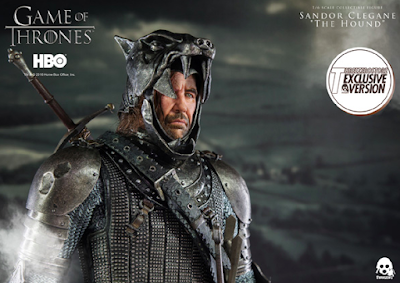 I am currently committing the cardinal sin of literature by reading the Game of Thrones series after having seen the show.  Say what you will, but there was no way I was gonna finish the book series before caving and watching the show.  Some internet meme would have slipped past my defenses and ruined a pivotal occurrence and I would have been pissed.  Thus far the two are matching up pretty well so I'm hopeful that trend will continue as I get further into the story.  Don't spoil it or I'll hit you.

Threezero are continuing their ridiculously detailed Game of Thrones line with what has turned out to be a very complex character; The Hound.  Don't worry, I won't spoil it for the four of you that don't watch it, but dude isn't just a chargrilled face.  There are two different versions of this killer with the heart of imitation gold, as the one offered as an exclusive to threezero will come with his killer dog helmet.  It's only a couple of bucks more, so do the right thing and spring for it otherwise there will be regret, and regret is an emotion that will get you killed on the field of battle.  I take this very seriously. 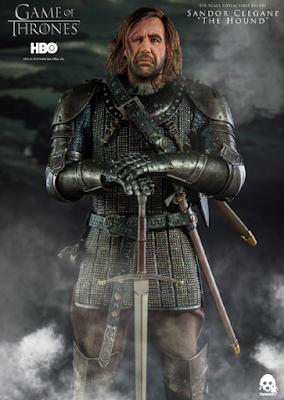