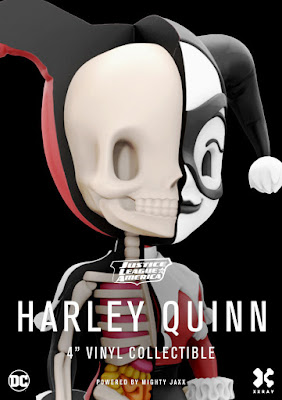 I haven't seen Suicide Squad yet because I am cheap and my wife is violent towards unruly strangers, but I heard a lot of folks complaining about it because the Joker is supposedly not in it much.  Instagram has lead me to believe that no one cared about any other character than Harley Quinn and studies have shown that you are seperated by no more than five degrees from a girl dressed up as Ms. Quinn, which doesn't make me upset by any means.  Now the Joker on the other hand looks like he's gonna be slinging nitrous balloons at this year's Gathering of the Juggalos, and that's way more frightening than anything my heart can withstand.  So maybe it's good his screen time is limited to a digestible amount.  Not that I'll have a real opinion until it's on DVD and I can trick someone in to letting me borrow it.

There are other characters being released by Mighty Jaxx and Jason Freeny this weekend, but Harley is my boo, so it's the only one I really want.  You can grab her and her other 4 inch tall compadres this Saturday, August 20th at 10 am eastern time from www.mightyjaxx.rocks.  Id it too early to start begging for Christmas presents? 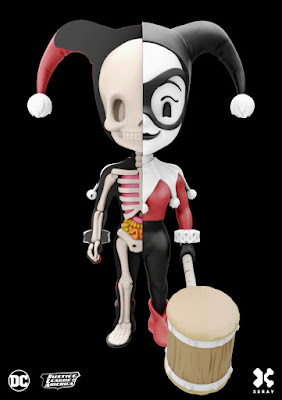