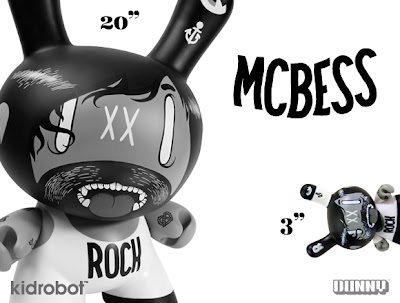 By now anyone who would be into this probably knows about it and has developed an opinion about whether or not they will be plunking down $400 to get the latest 20 inch Dunny from McBess x Kidrobot.  I will probably pick up his little 3 inch companion because A.) I don't have $400 to spend on anything that doesn't involve someone with a foreclosure notice and a lawyer and B.) The design doesn't really speak to me.  But that's ok, I haven't gone on tirades about hating Kidrobot and wondering if this is the end for them and threatening to sell everything I own that they made.  You know why?  Because I have other things to do.  And I take a more reasonable approach to things.

I don't have this crazy idea that everything Kidrobot produces is going to be something that appeals to me.  I've never walked into a museum and enjoyed every piece of art that I've seen.  Some I like more than others, some not at all.  It's not anyone's fault, it's just the way my brain is wired.

They are the most prominent company in the designer toy world and that makes them the biggest target for people looking to complain.  Message boards (especially their own) are filled with hate speech and tirades about what a crappy job they are doing.  I don't get it.  Toy collecting should be fun and if you've lost sight of that there are plenty of ways to sell your collection and take up another hobby, like cat breeding or ultimate fighting.

At the end of the day these objects are there to make us smile while we're alive and to make up a killer estate sale when we croak.  Plus, I have to go to work and entertain my wife.  Complaining is something I have yet to be able to fit in my schedule.  In times like this I am reminded of the wisdom bestowed upon us by this generation's greatest philosopher, Sweet Brown: 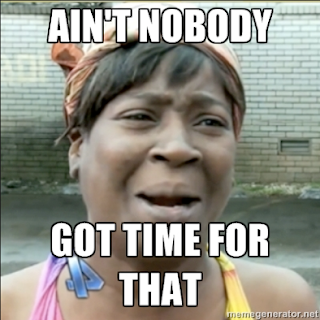 Oh, and the Dunnys go on sale May 9th for anyone that is still paying attention.
Posted by Chris at 6:28 AM