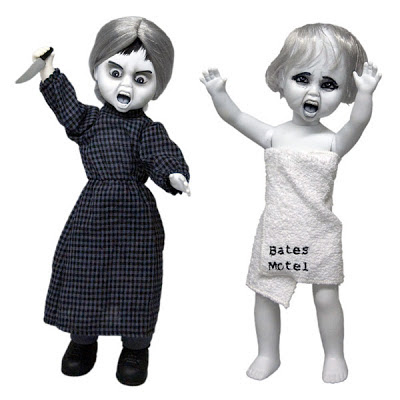 I have completely given up on that new Bate's Motel show.  The idea of the prequel has been dead to me since Star Wars tried it, so I'll admit I was a little biased going into it.  Then after having actually watched a few episodes I decided to never mistrust my initial judgement.  What sucks about the whole thing for me is just how over the top bizarre the entire town is.  There are Asian sex slaves, a drug ring, people being burned in public without anyone batting an eyelash, and other random acts of craziness that just make no sense.  What should have been interesting about the show is Norman Bate's transformation into the momma loving, knife wielding-weirdo we all love.  Instead what we get is a three ring circus that focuses on everything but his psychosis, which could have been interesting.  The lone bright spot Freddie Highmore is actually good as the young Norman.  Too bad not much can be said for the rest of the show.

Thankfully Mezco and Living Dead Dolls are here to remind everyone about the classic film and not this new crap.  These two are recreating the famous shower scene in which Anthony Perkins hacks to pieces Janet Leigh.  Sure it's tame by todays standards of blood and gore but this movie has withstood the test of time and even one really bad shot by shot remake.

For $64 you get both dolls, which is a pretty good deal in my book.  You can preorder them now and they'll be shipped to you when they release in October.