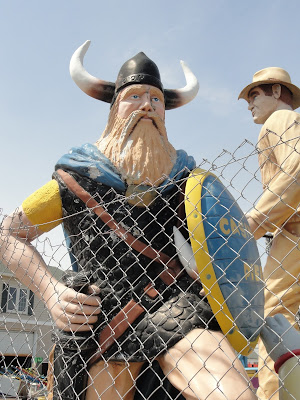 It's been a little over six months since Hurricane Sandy hit Seaside Heights and destroyed one of the most famous boardwalks in America.  While Snooki and those other morons from Jersey Shore were unharmed, the amusements piers themselves were claimed by the ocean.  By now everyone has seen the now famous image of the roller coaster sitting in the Atlantic, standing upright and looking as if it were put there intentionally.  I wanted to it in person, this steel monstrosity that had gone from being surrounded by happy vacationers to being the playground of curious marine life.

I've always had a love for shore towns; these waterfront carnivals that come to life for only three months of the year.   You don't have to go on any of the rides, or lose your life savings trying to win stuffed animals to enjoy their otherworldly atmosphere.  It's a combination of the flashing lights, the unique food, the smell of the salt water, and the plethora of ways that people have come up with to entertain you.

Sharon and I made the short drive last week to Seaside, a place we had neglected to visit since MTV invaded with their roving band of hooligans and tv crews.  I wanted it unspoiled, the way I had remembered it when we first started dating and I would try to impress her with my uncanny ability to win prizes on the crane machines, or when we would play Skee-Ball until our arms were numb and our pockets empty of quarters.  We had plenty of other places to visit so we didn't feel that were missing out on the experiences we loved until we watched the news footage of Hurricane Sandy.

We live about 10 miles outside of Atlantic City; just far enough inland that we were sparred the  storm's most devastating effects.  My parents and sister were living directly on the coast and both of their cars and the house they were renting were destroyed by the rising salt water.  I was cut off from them for days, as no vehicles were able to pass the flood waters and their cell phones had long since died due to the power outages (everyone is now safe, sound, and living in an area that has no chance of being swallowed by a storm swell).  Stressful would not begin to describe the situation.  My wife and I sat glued to the television news reports, trying to gather whatever information we could about what was going on.  It was during this time that we saw the helicopter footage of Seaside Heights and the roller coaster that had fallen into the water.  The images were beyond belief.  It looked as if the wooden pier had just disintegrated below it, leaving the structure in exactly the same shape as it had been when it was functional.

We didn't know what to expect when we arrived.  A lot of time had passed since the storm and rebuilding had been feverishly underway to prepare for the upcoming tourist season.  What we saw blew us away.  The amusement piers ceased to exist, and much of the boardwalk had vanished, leaving only the pilings deeply buried in the sand.  They had replaced a large portion of it, but there was still a long way to go.  On the other side of the street a parking lot had been turned into a makeshift graveyard of rides and mascots in various conditions.  The viking in the picture above was one of the pieces salvaged.

The entire scene was heartbreaking to see in person, but there also were signs of life returning.  A few of the restaurants and shops were open, and even a couple of the carnival games were there to tempt you with the promise of easy victory.  Any place not sealed off by police tape was crowded with people, most taking pictures, others just enjoying a nice spring day at the beach.  It was an attempted return to normalcy amid the constant reminders of destruction.  It was one of the things that is great about humanity.


You can look at many more pictures by going to www.facebook.com/TheToyViking