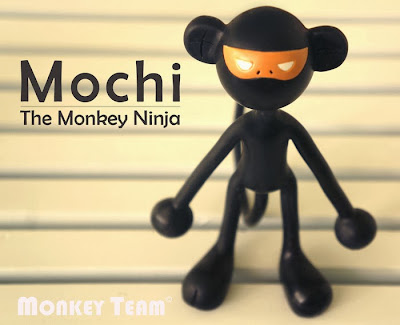 I get a lot of emails from people asking me to share the toys that they make.  Surprisingly enough, I get a lot about kid's toys, which is weird because if they'd even looked at this site they would know that I like to use very "colorful" anecdotes when talking about toys.  I don't think Fisher-Price really wants me talking about their new crap for your toddler while also talking about guns or dead hookers.  And there is always the chance that I will talk about guns or dead hookers because that's the kind of guy I am.  I don't like to limit myself to the topics of conversation on the Disney Channel.  I need to express myself, and sometimes that comes in the form of a heroin overdose story, or that time I found a dead guy in Philadelphia.

Bendable monkey ninjas aren't the normal thing I write about, but I do love monkeys and ninja monkeys sound pretty awesome, so I was starting to lean in favor of this new product.  Then they told me they liked my cats and I was sold, because they actually have viewed this site and new the dangers (i.e. the entire first paragraph) of me writing about their stuff.

Kacha Torn is a dude from Thailand who has created the aforementioned bendable monkey ninja named Mochi.  He has launched a Kickstarter page to help get his project funded and it's the most straightforward campaign I've ever seen.  You basically just preorder the figure and when he gets enough it will go into production.  Check it out for yourself by clicking here.

Email ThisBlogThis!Share to TwitterShare to FacebookShare to Pinterest
Labels: Kickstarter