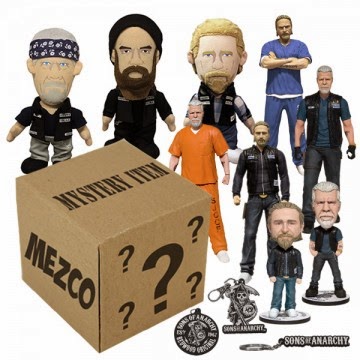 Good lord did you watch Sons of Anarchy last night?  Talk about emotional.  I won't spoil it for you in case you have it stowed away on your DVR because you were somehow unable to make time for it when it originally aired (what were you doing that was more important?).  And it's killing me a little on the inside because no one I work with watches it (they're bad people) and I wanna talk about it soooooooo badly.  Especially the brilliant scene when Jax and Nero are talking on the phone.  Uggh just call out sick and go watch it.

If you watch Sons of Anarchy I'm guessing you're a person that spits danger in the eye.  You don't just live on the edge, you dangle from it with one hand while taking a selfie with the other.  You need a surprise at every turn, and that's why the S.O.A. Mystery Box from Mezco is for you.  It's kinda like gambling, but without the shame of signing over your Ford Focus when the Eagles fail to cover the spread against the Packers.  I'll miss that car.

For $20 you get two official Sons of Anarchy products.  What will you get?  I don't have the slightest idea, but that's what makes it exciting.  Seven lucky people that order one of these will get an upgrade to a box featuring everything you see pictured above.  That's one for each season the show has been on the air, in case you're ever on Jeopardy.  Order yours from http://www.mezcotoyz.com/.